The Nissan Skyline is actually one of the most historic Japanese cars and has been around in various models for over 40 years.

Its production started in 1955 with the introduction of the Skyline ALSI-1, a car built by the Prince Motor Company.

The Prince Motor Company was established in 1952 by the Tama Electric Car Company.

Tama itself was founded by Tachikawa Aircraft Company which built fighter planes in World War II, and started producing the Tama Electric Car in 1952.

In honour of the Emperor of Japan Crown Prince Hirohita, Tama changed its name to Prince Motor Company and started producing petrol powered instead of electric cars. Prince used an engine designed by Fuji Precision Industries, a company which was established by Nakajima Aircraft Company. In 1954, the Prince Motor Company merged with Fuji Precision Industries.

Another important event in the Skyline’s history occurred in 1966, when the Japanese government recommended that larger companies should be created which would be more competitive in international markets and more resistant to hostile takeover attempts of foreign competitors. As a consequence, Nissan merged with Prince, just as Toyota merged with Hino and Daihatsu. Thus, from 1967 on, Princes were sold as Nissans or Datsuns. Even though, the Prince division is still alive within Nissan and responsible for the Skyline line-up today.

1958 saw the introduction of the ALSI- 2 series, which was built until 1963. The car was basically the same as its predecessor, except for a different bonnet emblem and a single large horizontal bar in the grille. New were also the quad head-lights instead of the twin lamps featured in the ALSI- 1 series and the GA4 engine with now 70hp.

The car came in coupe and convertible forms and was powered by the GB4 engine, a 1862ccm OHC 4 cylinder pumping out 94hp.

This car had a very beautiful design, but on the other hand was very expensive for its time. So unfortunately it was dropped in favor of the following S 50-E series, which was cheaper to produce. 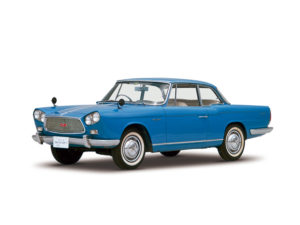 The elegant styling of this car, which is not outdated even today, was designed by the famous Italian designer Giovanni Michelotti. It became famous at the 1960 Torino International Motor Show. Both the engine (4 cylinders in line, 1,862cc, 94PS) and chassis came straight from the Gloria. The price tag for the coupe was 1,850,000 yen, while the convertible was 1,950,000 yen. Approximately 60 units were manufactured.

Information  Sourced From various to be nominated soon.