In May 1989, the eighth-generation Nissan Skyline (R32) was launched;

the GT-R model appeared in August, thus reviving the “GT-R” name after a gap of 16 years.

It featured a 6-cylinder in line, DOHC, 2,6-litre (280PS) RB26DETT engine; an electronically controlled 4WD torque splitter with ATTESA E-TS; and a 4-wheel multilink suspension. It holds the honor of not losing a single race in the All Japan Championships.

The 1989 R32 was the resurrection of old Skyline virtues, in that each of its many versions were very sporty and balanced in handling. The car came in sedan, coupe and finally also in GT-R form and for the first time in history, was available with rear-wheel-drive and all-wheel-drive.

The old engine line-up was mostly dropped, so all versions – sedans and coupes – at least got the RB20DE engine, a normally aspirated 2.0l inline-6 with 155hp. Stronger models like the GTS-t came with the RB20DET engine, already known from the R31 GTS-R, but with an increased output of 212hp. Later versions got the normally aspirated RB25DE engine, a 2.5l DOHC inline-6 with 180hp. 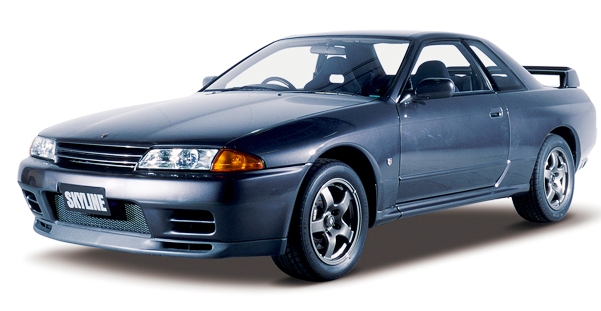 Over a decade after the last GT-R had been dropped, a new Skyline GT-R finally saw the light of day in 1989. Of course, expectations for the new top-performer were high due to the heritage it could look back upon. But this new version was more than worth the GT-R badge in any way.

At that time it may have seemed impossible for any car to resemble the PGC10’s success on and off the track – that was, until the new R32 GT-R came along, which soon earned the nickname Godzilla. The Skyline GT-R was available only in coupe form and featured high-tech in perfection, high-tech that in this case was used to support the driving experience, rather than hinder it.

It came with ATTESA-ETS (Advanced Total Traction Engineering System for All – Electronic Torque Split), an electronically controlled all-wheel-drive system that usually delivers the power to the rear-wheels, but can send up to 50% of the torque to the front wheels. Thus even drifts are possible with this car, which is usually very difficult with AWD. The handling was further enhanced by Super-HICAS, an improved system of the R31 GTS-X’s all-wheel-steering, to make this car one of the best, if not THE best handling car in the world.

The GT-R did not only have excellent handling characteristics, but also featured one of the best production engines of all times, the RB26DETT, a 2.6l DOHC inline-6 twin turbo with 280hp. The RB26DETT is a pure racing engine, derived directly from Group A racing, which was despec’ed to fit the maximum 280hp allowed by Japanese regulations. Tuned (newer) versions of this engine, however, have been seen to reach up to 1300hp, so make sure to check out the Tuning section of this site, because tuning is what the Skyline really is all about. Still, the standard version makes the 0-60mph sprint in 4.8 seconds, putting it on a par with a Ferrari 355.

But the GT-R was not only a great street rocket. It was basically designed to fit Japanese Group A racing standards. And racing is where Godzilla really shone. It won so many races (i.e. it won every single race – 29 altogether) in Group A that this class was abolished because nobody wanted to compete against Nissan’s flagship anymore.

The combination of the RB26DETT engine (maximum output: 280PS) and ATTESA E-TS proved too much for its rivals at the All Japan Touring Car Championships (Group A). 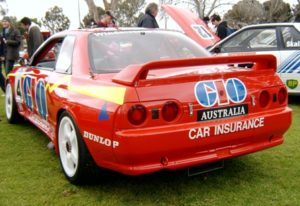 The GT-R, reintroduced with the R32 (launched August 1989), made its debut at the opening race of the All Japan Championship in March 1990. In the 4 seasons running up to the last All Japan Championship, held in1993, the GT-R achieved a spectacular record, winning all 29 rounds. This No. 12 Calsonic (“CalsonicKansei” at present) Skyline (K. Hoshino/Masahiko Kageyama) was victorious in 1990 and 1993.