The second-generation Skyline was launched in November 1963.

Intended to be a true owner’s car, its design was based on a brand new concept, the complete opposite of the American styling of the large first-generation cars.

It featured the new G1 engine, a 1484ccm OHV 4-cylinder, producing 70hp and in comparison to its predecessor had a more boxy shape.

The S50 introduced the four round tail lights, a Skyline feature that was kept for many generations until the R34 series.

It had large round brake lights and smaller round turn-signals beside them.

The car came with two transmissions, a 3-speed column change gearbox and a more sportive 4-speed floor change gearbox. Latter version featured bucket seats to support its more sportive character, while the column shift version only had a single bench in front. In 1967, the S50 series was replaced by the S57 series, which came with the new G15 engine, a 1483ccm OHC 4-cylinder with 88hp. It was the most powerful 1500cc engine in Japan. 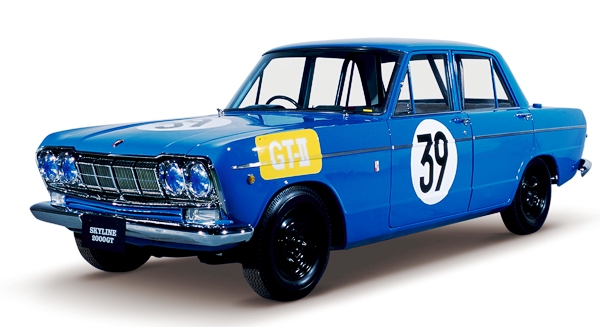 Birth of a legend

In 1964 Prince started an attempt to go into racing.

For this purpose the S50’s wheel base was extended by cutting the car off in front of the fire wall and adding an extra 8 inches of panel work to make a 6 cylinder engine fit in.

Consequently, the G7 engine, a 1988ccm OHC inline-6 from the upper class S40 Gloria model, was installed to the car. In the beginning only a small number of this car were built to homologate it for GT-class racing, but since it proved very popular, Prince decided to put it into full production.

The resulting car was called the S54 series or the Skyline 2000GT and came in two versions.

The GT-A used an unchanged version of the G7 engine with only a single carburetor and 105hp. The GT-B on the other hand got a 5-speed close ratio gearbox, full instrumentation, a limited slip differential, power brakes, a 99 liter fuel tank and a high compression version of the G7 with triple 40DCOE-18 Weber carburetors and 125hp. Both featured disc brakes with twin piston calipers up front and alloy finned drum-brakes at the rear. Later models even had flow through ventilation with small eye ball vents added to the dashboard.

Of both, the GT-B was finally the one to be used for racing. It finished 2nd in its first race, the 2nd GP of Japan in 1964 and almost beat the victorious Porsche 904GTS, which was a pure race car. This was an incredible achievement considering that the Skyline was a 4-door sedan. The S54 series was continued until 1968 and with its several race victories laid the foundation for the Skyline legend.

Thinking that victories on the racing circuit would spur sales, Prince mounted the G7 engine from the Gloria into the Skyline and produced the required 100 units to gain official approval. The car (launched on the 1st May 1964) was entered in the 2nd Japan GP in 1964. A Porsche 904 won the race, but Skylines monopolized the 2nd to 6th places.

It soon became famous for its performance and development continued, producing the GT-B, launched in February 1965.